Francis Naumann received his PhD in art history from the City University of New York in 1988. He has written extensively on the Dada movement and Marcel Duchamp, and is the author of New York Dada, 1915-23 (Harry N. Abrams, 1994). 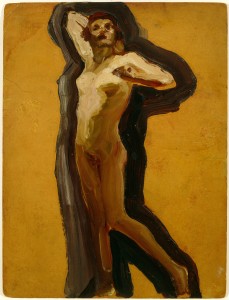 I first heard about Theresa Bernstein in the mid-1980s, when I was preparing research for my book on New York Dada.  I was planning to include a chapter on the Baroness Elsa von Freytag-Loringhoven, and I understood that Bernstein had used her as a model.  I decided to try contacting her, for I thought she might have some intriguing anecdotes of the Baroness that I could use for my book.  In 1989, I interviewed her on this subject, making a few notes on the inside cover of a catalogue that she had given me of her work.

About a year later, I attended an exhibition at the Museum of the City of New York called “Within Bohemia’s Borders: Greenwich Village 1830-1930,” which included her 1917 oil-painted portrait of The Baroness Elsa.  I was overwhelmed by the quality of this painting, for I found it to be painted with the sort of confident and bravura brushwork more often associated with artists like William Merritt Chase and Robert Henri.  I purchased the catalogue for the show (actually a series of photocopied sheets incased in a spiral binding) that listed Bernstein’s year of birth as 1890.  Only then did I realize that she was nearly 100 years old (until then, I had assumed she was in her 80s).

I called Bernstein and asked if her painting of the Baroness was still available, and if she had made any others.  She told me that the big portrait was with Girard Jackson, a person who, she explained, was acting as her dealer.  But she had made a drawing and a smaller study in oil of the Baroness in the nude.  The smaller painting and drawing, however, were stored in her studio in Gloucester, Massachusetts, where she went during the summer months.  She promised that when she next went there, she would bring them back for me to see them and possibly purchase one or both.  She brought them back, but, unfortunately, forgot that the painting was for me, and sold it to another art historian whom I sent over to meet her.  I called and expressed my disappointment, since she had, in effect, sold the painting that was reserved for me, but she told me not to worry because she had painted another and would bring that back with her the next time she went to Gloucester.  That eventually occurred, and the painting I acquired is on display in the present retrospective devoted to her work.  It was around this time that I asked if it would be possible for me to purchase the larger and more formal portrait that I had seen in the museum show, whereupon she directed me to Mr. Jackson, who was then living in an apartment in Ramsey, New Jersey.  Soon thereafter I purchased that picture, too, which is also included in the present show.

During the late 1980s and early 1990s, I saw Bernstein on several occasions, going over to visit her at her studio on the upper West Side.  At first, I would visit her alone, but then in the early 1990s, I was joined by my wife, Marie T. Keller.  She showed us watercolors that she was working on at the time, mostly drawings of still lifes on paper (although I also remember that she once showed me an oil portrait she had made of Raphael Soyer, an artist who had a studio in the same building).  Bernstein was always a delight to be with, so when we learned that she was about to celebrate her 100th birthday, we invited her to dinner (we later learned that she was considerably older).  We took her to the Kosher Dairy Restaurant on West 72nd Street in Manhattan, where she spent a good part of the evening telling us about her childhood (the context of the restaurant triggered off many memories of her youth).   Perhaps the most memorable part of the evening was when she started singing songs that she recalled from her childhood growing up in Philadelphia (she remembered every word of every song and sang each with a surprising degree of skill).  We walked her back to her studio, and that was the last time we saw Theresa Bernstein.