Theresa Bernstein, “Ashcan” Realist Artist Whose Work Spanned the 20th Century, To Be Exhibited at The Graduate Center and Baruch College in Manhattan 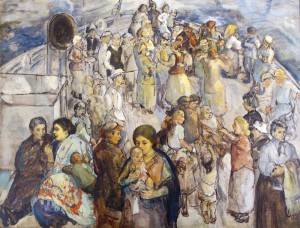 The Immigrants, 1923. Oil on canvas, 40 x 50 inches. Collection of Thomas and Karen Buckley

Theresa Bernstein: A Century in Art opens at the James Gallery at the Graduate Center on November 12th and is immediately followed on November 13th with an additional opening at The Sidney Mishkin Gallery, Baruch College.

Curator Gail Levin, a Distinguished Professor of Art History, American Studies and Women’s Studies at The Graduate Center and Baruch College and renowned biographer of Edward Hopper, put together the Bernstein exhibits in a concerted effort to recover the artist’s significant contribution to American life, which spanned the 20th century. According to Levin, Bernstein painted the big issues of her day, such as the meetings for women’s suffrage in New York City, World War I parades, immigrants in the 1920s, hippies in the 1960s, thus casting Bernstein as a unique chronicler of twentieth-century American life.

“I discovered Bernstein while researching Edward Hopper. She was once more popular than Hopper with whom she sometimes showed during the 1910s and 1920s,” said Levin. “The exhibition, ‘Theresa Bernstein: A Century in Art,’ explores how fame is fleeting, but shows that the quality of her work has outlived fad and fashion.”

(Watch Levin on video explain the origins and inspiration for “Theresa Bernstein: A Century in Art”).

“Theresa Bernstein: A Century in Art,” resulted from research begun in an exhibition seminar in the art history doctoral program that Distinguished Professor Gail Levin taught at the Graduate Center of the City University of New York in the fall of 2010. The students, all of whom contributed research for the exhibition, book, and website, were Sarah Archino (CUNY Ph.D., 2012), Diana Fischman, Stephanie Hackett, Elsie Heung, Gillian Pistell, and Lindsay Smilow. Two scholars, who had each written about Bernstein’s art, organized a show of her work, and befriended her, visited the seminar and shared their expertise: Dr. Patricia M. Burnham and Dr. Michele Cohen (CUNY Ph.D., 2002), the latter of whom also served as a consultant to the project. Essays by Sarah Archino, Patricia M. Burnham, Michele Cohen, Stephanie Hackett, Elsie Heung, Gail Levin (editor), and Gillian Pistell appear in Theresa Bernstein: A Century in Art.

According to Levin, Bernstein’s style began as a kind of realism, often linked by critics to the Ashcan School, but ended up more expressionist. Musically inclined, she was a fan of opera, dance and jazz. She painted Louis Armstrong, Cab Calloway, and Charlie Parker as well as Loie Fuller, Martha Graham, and Verdi’s Requiem

Duncan Phillips was the first patron to buy Bernstein’s work for a museum, and the Phillips Collection is lending these works to Bernstein shows organized by Levin. Other museums which will lend Bernstein works range from coast to coast, from the Metropolitan Museum of Art to the De Young Fine Arts Museum of San Francisco.

About the Graduate Center, City University New York
The Graduate Center’s (GC) mission is to prepare the next generation of scholars for careers in the academy, cultural institutions and public service, to carry out advanced research and scholarship, and to increase public understanding of pressing matters of local and global significance. Approximately 4, 500 students are enrolled in forty doctoral and masters programs, sustained by a wide range of financial support. Recognized for its scholarly leadership across the humanities, sciences and social sciences, the GC is also a platform for influential public intellectuals, who, through the GC’s public programs, inform and enliven debate, and enrich the cultural life of New York City.