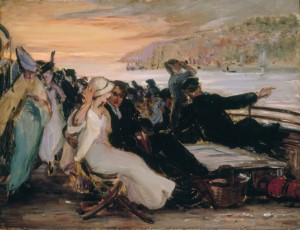 Outing on the Hudson, 1914. Collection of Edward & Helen Ezrick

I first met Theresa in April of 1981.  I was house staff at Beth Israel Hospital in downtown Manhattan, caring for her husband, William Meyerowitz.  At the time, he had been diagnosed with terminal carcinoma.

My first encounter with Bill was eventful.  After only a brief moment together I could tell what a loving and gentle person he was.  It was late and my waking on call hours had surpassed 24 but I had to see him.  He was a frail small man, in no distress, and in good spirits.  On his nightstand was a brochure of a gallery exhibit with his signature ‘prancing horses’.  I immediately recognized a talented artist.  I sat at his bedside, he took my hand in his, and we talked.  More than 30 years later I can still vividly remember how comforting this gesture was to a very tired medical intern.

A day or so later, I met his wife of more than 60 years, Theresa Bernstein.  She walked slowly with a cane in one hand and was held on the other side by a much younger friend.  She greeted me with her engaging smile.  We spoke for just a few minutes, but before I left, I had been invited to their studio to see their artwork.

A few months later, around June of 1981, I got a call from one of their friends informing me of Bill’s poor health.  I advised them to bring him to the hospital.  Fortunately, I was doing my emergency room rotation at the time and could take care of his admission personally.  I was so preoccupied with Bill that I was getting sideways glances from the charge nurse.  Bill had already made it known to me that although he had great respect for his personal physician, he wanted me to care for him.  That meant a lot to me.  A day or so later, Bill passed, peacefully and well cared for.

Weeks later, I stopped by their studio and had a heart-to-heart with Theresa, as most doctors routinely do with their patients’ families.  Needless to say, I was very concerned for her welfare and state of mind.  She seemed during this encounter open to advice and suggestions.  We talked about her writing and I recommended that she record her thoughts and hire a transcriber.  With this method, she later published multiple books about William, their travels and a book of poetry, which revealed to me her life long love of writing.

I made many visits to the 74th street loft thereby starting my art collection.  She showed me mainly Bill’s works and we negotiated prices in an amicable way.  I must add, that I think she got the better of me.   During the next twenty years of our relationship I hardly ever walked out of her studio without at least purchasing a copy of her latest publication.

Theresa would often say that most people seemed to have money for everything except her artwork.  She illustrated this by telling me how she would be denied a sale because the potential buyer was low on funds, while these same people would always have money for cars, home improvements and other material things. This bothered her because she and Bill were true bohemians and never valued material possessions or creature comforts. I suppose I was listening, because when Outing on the Hudson became available, I threw caution to the wind, channeled Theresa and convinced my very thrifty wife that we should own it.

She had a lively spirit, and on a visit I made to Gloucester, I saw her spontaneously do a little jig witnessed by her nephew Keith and my 7 year old son, Ben.  She seemed timeless rather than old.

Theresa remains, in my experience, as one of very few people that I’ve encountered, with an amazing level of focus and drive.  Once, I mentioned in passing, that I knew the curator of the Museum of the City of New York, Joseph Noble, from my days as the founding director of a small gallery displaying the works of patients and participants in drug rehab facilities.  She quickly asked for an introduction and eventually ended up with her own exhibition at the museum.

Theresa was a humanist in every sense of the word, she loved people and was very popular and well liked.  She once confided that she got along so well because she accepted people as they were.  An approach that we can all emulate.