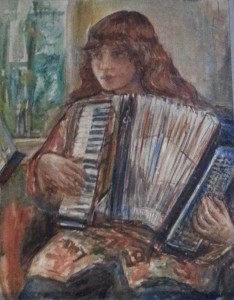 Portrait of Diane by Theresa Bernstein 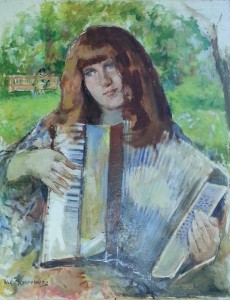 Portrait of Diane by William Meyerowitz

I met Theresa and William as a young girl of about 13, when I carried their groceries home from a neighborhood store. Our relationship grew through the years, as I often modeled for them, drove them (after I turned 16) for their errands, etc., and also back and forth to New York City.

Being somewhat of a “flower child” of the sixties and early seventies, their Bohemian life was a natural draw–living their lives in a free and open way. From day to day painting their existence on canvas– the free spirit that they presented had a great appeal and attraction to all who entered their lives.

Our friendship continued through the years–beyond Williams passing in 1981, beyond all the numerous art exhibitions and awards, her writing of 6 books (starting when she was in her nineties), sharing travels to New York, Connecticut, Washington DC, Philadelphia, Texas and California, and through 17 summers with her at her Gloucester home and multiple visits to New York when she could no longer get to Gloucester until her passing in 2002.

Just as William depicts Theresa in the background (sitting on a bench) in his portrait of me, Theresa’s impact on my life continues to influence me and always will. These two portraits of me were painted when I was approximatly 15 years of age–William and Theresa each seeing me differently.

I feel very fortunate to have experienced knowing both of them and observing their relationship and their respect for each other. I once asked Theresa to describe her relationship with William and she said, “Our relationship was one continuous conversation.”

Thus continues the impressions of their life and work on so many of us who were lucky enough to have known them.