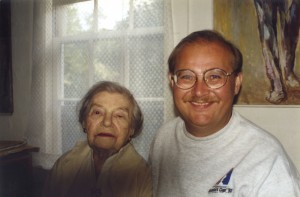 I was first introduced to the art of Theresa Bernstein while in graduate school. During winter break I went to a holiday party at a relative’s home and on display was a newly acquired painting by Bernstein Outing on the Hudson. That painting reached out and grabbed me, never to let me go. I wanted to see more of the artist’s work. Through her caretaker I was able to visit her Gloucester house during the winter of 1984, while Theresa was in New York. I looked at art in every room of the house. In the attic, I discovered a pile of large un-stretched canvases. As I searched through the pile, I discovered Lilies of the Field. I wanted this painting very much. In school, with no money, barely paying rent and buying food, I began negotiations with Theresa Bernstein by phone. She was a tough negotiator and, trying to be respectful of her age, it was not an easy transaction. In the end I did acquire my first Bernstein painting. My parents provided the loan to purchase the piece and have it conserved and framed. That was the beginning of a long friendship with the artist in her 90’s, and I in my twenties. It also created a new relationship with my parents – “Benefactors”.

Theresa and I would correspond regularly by mail. I would visit her in both Gloucester and New York. I discovered very quickly that she would meet me on a moment’s notice…but I was always expected to acquire art. She quickly became my “HERO” and friend. I wanted to spend more time with her, listening to her stories and hearing her recite poetry. I know by memory “I’ve looked at Twice but can’t Stand the Price,” a poem she wrote and dedicated to art collectors.

I soon realized that I could bring friends on my visits to her studios. It didn’t matter to Theresa as long as someone in the party acquired a piece. She started to realize that I could help facilitate art transactions for her, and our bond grew stronger. I could call her at midnight on a Friday evening after driving from Newton, MA, to New York City and ask if she wanted to go out for Japanese food. She would always say “yes” with a minor condition, “I don’t eat Sushi.” She would jump in the front seat of my convertible sports car for a ride on condition that I stop for a quart of vanilla ice cream that we would share. She would go with me to the Gloucester Stage Company to see a production, stating that she couldn’t hear but loved to watch the motion.

She enjoyed the fact that I was a banker and spoke to me about her business of art selling, marketing, and P.R. Actually, I learned a lot from her. Theresa had a phone book that everyone had to sign with their name, address, telephone number, spouse’s name, children’s names, and, of course, occupation -not very different from electronic data bases of today. She would set aside time every day to write letters to her collectors, museums, art galleries and publishers. Her “business work space” was a well-organized table with all the materials she needed to do her remarkable public relations – paper, pens, envelopes, stamps and typewriter. I must say this was the only space in her environment that was neat and well-kept.

Her genius as an artist is without dispute. However, her genius as an early female entrepreneur is equally important in my humble business opinion. My dear friend, Theresa, I do miss you!