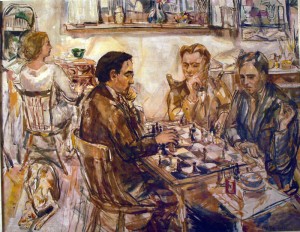 An invitation to visit Theresa Bernstein in her studio in Gloucester, where she and William had spent more than a half century of summers. Gloucester, the setting of so many of their works. I could not turn it down.

She had extended the invitation to Pan and I a few months earlier when she found out we were planning a quick tour of the New England coast at the end of the summer. Gloucester was added to our itinerary.

Pam and I picked her up shortly before lunch. As we drove by the wharf, she pointed out locations of buildings no longer standing, the place where some gathering had taken pace, the spot where they used to come to paint…. We stopped at a seafood store for fresh crab meat and returned to the studio.

After lunch, she quickly directed our rather general conversation on art and poetry and music to one specific piece, Gloucester Wharf, an early painting by William. She knew exactly where it was amid the stacks of stretched and un-stretched canvases, which cluttered the corners and lined the walls of every room in the house. She spread the painting on the floor in front of me and rocked forward, “Do you like?” she asked.

Men hauling gear and goods in the foreground. A vibrant Gloucester harbor in the background. I loved it. “You should take it home with you,” she said.

“Pooey, you should take it to New Mexico with you. I will make it easy for you. What do you say? Think about it.”

I was thinking about it but I was also thinking about one of her paintings, The Chess Players. “That is William playing the Massachusetts chess champion,” she explained. “Stuart Davis is watching. That is me playing the piano. Do you like it?”

She did indeed make it easy for me and I purchased both of them. Several months later, i read her 1933 Gloucester Daily Times article, “The Artist and the Community,” for the first time. I had a sense of deja vu. That afternoon in Gloucester, fifty years after she had written the article, she led me gently along the path of beauty, and I, and average man, became one of her “art patrons of today.”