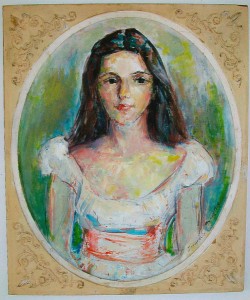 On a hot July evening in 1961, at the annual Rockport Artists Costume Ball (the theme that year was “Fantasia”), a short, older woman introduced herself as Theresa Bernstein. She asked me to pose for her in my costume for a portrait at the North Shore Arts Association in Gloucester. She requested I first go to her home on Mt. Pleasant St. I immediately agreed to pose for this total stranger. As a 27 year old mother of two children under the age of 4, I craved a new experience.

The following Saturday, I rang the doorbell of an old, rectangular, white house with shaggy ivy twisted around its chipped, green shutters, and fronted by four pine trees. I wondered why I trusted this stranger. She opened the door, asked me in, and said, “Take off your clothes.” I stopped breathing.  She continued, “Put on your costume.” I resumed breathing.

I dressed behind a movable paneled screen in the front parlor, which was furnished with a long and bulky 1930s styled couch. I smelled the pungent odor of oil paint and turpentine. The room was cluttered with paintings–on the floor, on easels, and covering the walls. All were signed “T. Bernstein” and “William Meyerowitz.”

We rode in a taxi to the North Shore Arts Association’s building on Pirates Lane. For six hours, I sat posing in the corner of a long, narrow gallery. During the sitting, Theresa told me some fascinating stories of her life. She and her husband married in 1919, and they had devoted their lives to painting. During the winter months, they lived in their studio in New York City.

I was thrilled to finally see the finished work but was very disappointed in the purchase price of $500. The total downpayment on our first house in Marblehead, purchased only a year before, was $500. 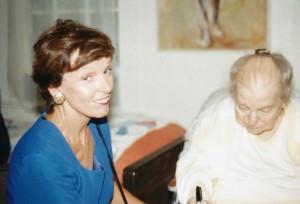 I occasionally corresponded with Theresa. In 1966, she wrote, hinting that she was tempted to paint over my portrait if I was not going to buy it. Five years later, in 1971, she wrote, giving me one last chance to purchase it, or she would definitely reuse the canvas and frame. I answered by mail, giving her permission to do so. I had been ten years since the sitting, and my husband Dick and I were busy raising four children. Investing in art was far from our priorities. I accepted the fact that my image on the canvas was gone forever.

In 1981, I received a letter from Theresa, informing me she was writing a biography of her husband who had died earlier that year. She was in Gloucester for the summer and asked me to call her. I called, and inquired whether she had painted over my portrait. She stated that she probably did, as she had not seen the portrait in her Gloucester or New York homes for 20 years. 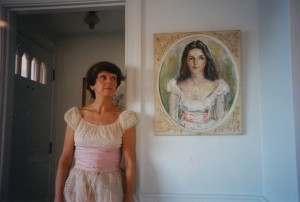 Nancy Farrell and her portrait in 1998

In 1989, when Theresa was 99 years old, she invited me to her end-of-the-summer party. She was signing copies of William Meyerowitz: The Artist Speaks, the biography she had written of her husband. I purchased a copy. The house was crowded with a variety of interesting guests, and my friend, Connie Willis, convinced me to search among the many dozens of paintings stacked against each other. To my astonishment, I found the portrait! It was in a corner of a back room, and behind many other original paintings. There it was…the oil painting of me with long dark hair, and looking so very young! I showed it to one of the Boston art dealers present at the party. When she gave me an estimate of its price, I gave up the thought of ever owning it.

In 1997, I attended a public lecture given by Theresa in the old North Shore Arts Association building. She sat 20 feet from the spot where I posed 36 years earlier. She spoke very clearly to a large audience, telling stories of her past. She described the wonderful time she had at a party thrown by Marcel Duchamp, a close friend of Theresa and her husband. 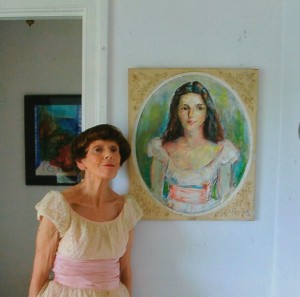 Nancy Farrell with her portrait in 2013

At the end of the summer of 1998, I attended another party at Theresa’s. Upon entering the front parlor, I spotted my portrait standing on the floor in front of other paintings. Nine years had passed since I had rediscovered it.

Three days after the party, I searched my attic hoping to find a photograph of myself in the costume I wore in 1961. It had been a bridesmaid’s dress, and I had sewn the bottom up under the waist to create the look of a ballerina’s tutu. No photos in any album showed the dress. I opened a few old boxes looking for autumn deocrations. Opening a third box, I was startled to find the very dress. The pale, pink organdy dress with short, puff sleeves, low, round neck, and bright, pink, taffeta waistband had lived with us for more than three-and-a-half decades. We had moved to three different homes and it had survived. This was a sign!

That moment, I decided to purchase the painting. I immediately called Theresa’s home and was told she was leaving for New York the following morning. I made arrangements to visit that evening to negotiate the price of the painting.

Theresa was in the back studio. She said how please she was to sell me the portrait. She claimed she remembered painting me. Her mind was still very sharp at age 108. She invited me to visit her in New York. I held her hands.  Talented hands that changed blank canvases into colorful stories. A century of creating! I feel very privileged to have known this remarkable woman.