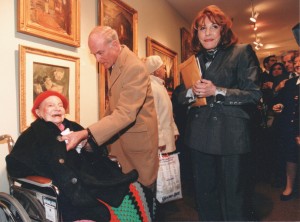 Theresa, Jerry Jackson and Joan Whalen at the opening of Theresa Bernstein: A Seventy-Year Retrospective, 1998

As many of you know, Theresa Bernstein (1890-2002), who I believe was the oldest living artist in the world, passed away on February 12, 2002 just two weeks shy of her 112th birthday. While Theresa’s longevity has held endless fascination for many people, what is important is that she was among the youngest of the urban realist painters — later known as the Ashcan School — to embrace what was then a bold, modernist subject — city life as it was observed in city streets and public gathering places.

When I was assembling my exhibition celebrating the centennial of Greater New York — New York: A Century of Wonder June 25 – July 12, 1997, I accepted a consignment of Theresa ‘s monotype New York Brownstone signed “T. Bernstein.” There was a birth date of 1890 and so I inquired about her death date. The consignor happily informed me that 1) T. Bernstein was a woman; 2) she was still very much alive, feisty, witty, savvy and determined and 3) she had always signed her work T. Bernstein to avoid discrimination in the male-dominated art world of the early 1900s. “She lives in a loft studio on West 74th Street. Would you like to meet her?” asked the consignor.

Prior to our meeting, my research revealed that there were two very important Bernstein works at the National Museum of Women in the Arts in Washington, DC. She had also enjoyed a major one-person exhibition at the Museum of the City of New York in 1990-91. I decided that I too would give her a one-person exhibition.

By the time I arrived at her apartment building, Theresa had already been alerted that I intended to give her a show. When I walked in, there were several people already there including her nurse Violet and her caregiver and accountant Suzanne Laurier. She was sitting in a wheelchair and was sketching a vase with her favorite flower – lilies. Suzanne wrote on a large pad “Joan Whalen is here.”

Theresa looked up and put on her glasses. “So,” she said, “you are Joan Whalen. You look a little young. Are you sure you know how to sell my work?” 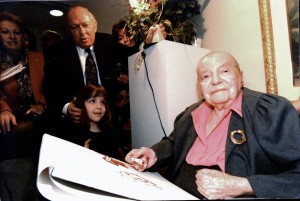 I answered: “Yes Ma’am, I do and it will be my honor and privilege.”

“Well,” she said, “let me tell you something. When people come into your gallery, I want you to lock the door and don’t let anyone leave unless they have bought a painting.” I did not realize until later that over the years when people came to her loft, they always left with a painting under their arm even if it meant that they paid in monthly installments! This was the beginning of an incredible relationship that I will never forget.

And so, on February 25, 1998, I opened my exhibition Theresa Bernstein: A Seventy-Year Retrospective. Bernstein fans and friends came from all over the country. The event broke all attendance records at the New York Gallery building. There were so many people that the security guards, to obey fire laws, made people form a waiting line down 57th Street. When she arrived, the TV cameras caught her incredible entrance and many sobbed. 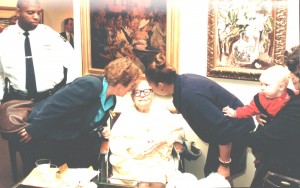 At the opening of Theresa Bernstein: An Early Modernist, 2000

Theresa was introduced to my granddaughter Alexandra who was then only six years old and playing to the cameras invited her to draw pictures of blueberry pies. “You know how delicious blueberry pies can be,” she said. The exhibition was a total smash as were the rave reviews in The New York Times, The Boston Globe, Artnews magazine and Antiques and The Arts Weekly. Mayor Rudolph W. Giuliani also wrote a special letter to Theresa congratulation her on her 109th birthday.

In the spring of 1999, Theresa was honored with a reception and exhibition to celebrate the publication of her book, Rabbitville, begun over 70 years ago to entertain young children who posed for her, illustrated with her sketches of characters like the ballet teacher Madame Tiptoe and the painter Monsieur Pallette. Theresa said that “it tells the story of rabbits who live in a peaceful valley where enthusiasm, generosity and love make all the difference.”

It was during this exhibition that I met two wonderful people – Martin and Edith Stein – who literally fell in love with Theresa’s work and began to acquire some of her most important, museum-quality paintings.