Theresa would never  tell her age. The day Rose Kennedy turned 100 Theresa announced that she was 100 as well!

I first met her  in her studio. She was in her 90’s. There she was reclining on her sofa wearing a short skirt and stockings, doing leg lifts. She did them daily and was very proud of her exercise regime. 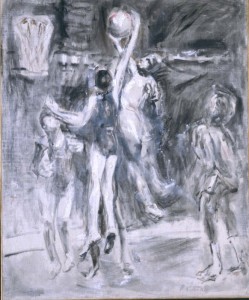 I first exhibited her work in 1990. Theresa was her own best salesperson. She would stand next to one of her paintings and talk about it to her audience. Then she would ask, “Do you want to buy it?”  I recall my first meeting with her  and she would not let me out of her studio unless I purchased something. And I did! In her soft gentle way she could be very intimidating and was not afraid to ask for what she wanted.

Theresa took good care of herself, and had many good friends who helped her as she got older. Her complexion was like peaches and cream. She never looked her age. She made sure that every dinner ended with pie and ice cream. This was to keep her weight at a good level, as instructed by her doctor.

Towards the end of her life while she could still make art, she kept it quite simple. Her drawings were done in ball point pen, never lifting the pen from the paper, drawing in circles and swirls.

Her subject matter was usually basketball players on the TV.  When she painted she would take small tubes of watercolor and use them as if they were brushes, squeezing the paint onto the paper and “drawing” with it.

Theresa was very content with her life and devoted herself to her work and to the memory of her husband, William Meyerowitz.

I am sure that she left this world with her famous giggle, a smile on her face, and a sigh.