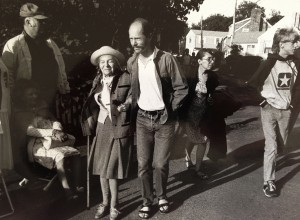 Theresa Bernstein and Wilber James in Rockport, MA, on July 4, 1986

Theresa Bernstein was a “force of nature” even when I met her in the early 1980’s, quite late in her life. My sister-in-law, Mary Ellen James, an artist in her own right, suggested that I meet Theresa and take a look at her and her husband, William Meyerowitz’s paintings with the intent of buying one of each. I had been a Peace Corps volunteer in the 1970’s and had subsequently settled in Washington State where I was a carpenter, cook and entrepreneur until I returned to my hometown of Rockport, Mass. to live. I did not have unlimited amounts of spare cash to spend on art.

I remember my first meeting with Theresa at her home in Gloucester as if it were yesterday and I remember the “stacks” of paintings in her front room, unframed and poorly cared for. When I asked her about the paintings she suggested I go through the stacks and “pull out” any that might interest me and she would give me a price. I recall her aggressively marketing William’s work far more than her own and, in fact, it was one of William’s still lifes that I initially purchased, it had Cezanne like qualities but was in poor condition and required significant restoration work by noted conservator Christopher Kim Clark who lived in Rockport. In fact all of William’s and Theresa’s paintings that I subsequently purchased required various levels of restoration due to their poor storage and improper handling over the years since they were painted.

Once Theresa decided that I was in the market to purchase more than one of William’s paintings, she became quite animated and forward – some might even say aggressive. She told me that she would guide me to the paintings that she felt were the best ones, which turned out to be all of them, and she suggested that I buy several at a time and pay for them in installments over time since I had already informed her of my limited buying power. When we reached an agreement on which ones I wanted to buy and settled on a price, I wrote up the terms and we both signed the handwritten contract. I had the strong impression that Theresa was doing everything she could to raise money from the sale of the paintings in order to publish books on her and William’s paintings and their lives together as well as on her poetry. 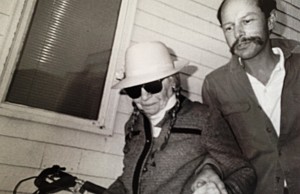 Theresa Bernstein and Wilber James in Rockport, MA, on July 4, 1986

Despite her age, Theresa had 100% of her mental faculties and was very ambulatory when I knew her on Cape Ann even though she would use a cane and later a walker. She would also walk holding my arm as can be seen in the two photographs of Theresa and me on July 4th, 1986 in Rockport, Massachusetts. She was up on current events and very interested in a vast number of subjects, she could recall exact details of conversations, paintings, concerts, her time with William as well as with other artists with whom she associated with in New York City now known as members of the “Ashcan School”. She was a prolific writer of letters often marketing the books that she had just written or intended to write. She was fearless and determined to get as much done in the remaining years of her life as time would allow. She was tireless and sometimes abrupt and challenging in her pursuit of a painting sale. I remember one incident where I introduced her to a very successful Hollywood producer whom I had brought to her home to see her paintings. The producer was non-committal about buying a painting and got up to leave; she saw her chance to sell a painting start to walk out the door and, unassisted by a cane or walker, she quickly headed him off at the door and grabbed his arm and exclaimed “listen snookums, you have to buy a painting.” He did!

Some have suggested that Theresa was taken advantage of by collectors or dealers to which I would say it might have been the other way around. Many of the paintings she sold were in such bad shape that they required thousands of dollars to restore. These paintings were definitely on their “last legs” and would probably not have survived in reparable condition many more years. Some were torn and in pieces, missing paint, all were unstretched. I am still amazed that she was able to sell so many of the paintings despite their condition.

Theresa managed to juggle her many friendships and relationships very effectively. For an elderly woman of limited means, she was able to accomplish so much in her later years through her sheer determination and force of will but also because of her network of friends and caregivers who helped her live an independent and mobile life. She attended events, parties, gallery openings and, despite her age, did not want to sit at home in comfort – she did not want to miss a thing.

I have little doubt that without Theresa’s unrelenting effort at marketing her and William’s art late in her life, their importance as artists would have gone unnoticed. Certainly her importance as a ground breaking woman artist among the “Ashcan School” might have gone unrecognized for years if not forever. Theresa was a woman on a mission and she was not always easy to deal with; she had a New York edge when she needed to have one but more often she was a kind, generous and caring woman who loved people, sharing an intimate conversation and drinking a cup of hot water with just a touch of lemon.