Dr. Michele Cohen, who received her Ph.D. from the Graduate Center of the City University of New York, now works in public art. She knew Theresa Bernstein well and in 1990, organized a major exhibition for the artist at the Museum of the City of New York. She is author of the book, Public Art for Public Schools, published in 2009. 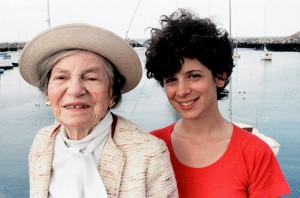 In 1983, I entered a small gallery at the New-York Historical Society looking forward to seeing original paintings by Theresa Bernstein.  I knew of only one of her works — The Suffrage Meeting (1914) — thanks to a grainy microfilm that documented a 1915 exhibition supporting women’s struggle for the vote.  To my surprise, I encountered the 93-year-old artist herself.  Never shy, she solicited my opinion of her show, and the conversation that began that November day ultimately led to Echoes of New York: The Paintings of Theresa Bernstein, a retrospective I curated at the Museum of the City of New York seven years later.  Our friendship continued until Bernstein’s Death in 2002, at the extraordinary age of 111.

During walks arm-in-arm down Columbus Avenue near her studio apartment (one of the first loft spaces in New York), or while cracking lobsters nose-to-nose at her kitchen table in Gloucester, Massachusetts, I came to know Bernstein and saw how her penetrating gaze fixed on ordinary people engaged in the activities of daily life.  Throughout her remarkable life, which spanned the entire 20th century, Bernstein had a finger on the pulse of her times, embracing new technologies and cultural trends with the enthusiasm of a youngster.

A lover of people and spectacle, she interpreted New York City in the early decades of the 20th century with vigor, wit, and insight.  Bernstein’s paintings couple the vivid intensity of a first impression with incisive characterization, technical bravura, and rhythmic animation.  Upon closer examination, many dissolve into planes of pigment, patterns of gestural lines, and spots of color; yet each canvas retains its focus on an external reality.  She was an explorer who probed city life, especially from a woman’s viewpoint, with a tireless fascination and sensitivity.

Just shy of her 100th birthday, elegantly and dramatically attired with her signature hat and cane, Bernstein could be seen beaming at the opening of her retrospective at the Museum of the City of New York  in 1990.  Surrounded by her bold, vivid vignettes of New York life more than 70 years earlier, Bernstein clearly had a right to feel proud.