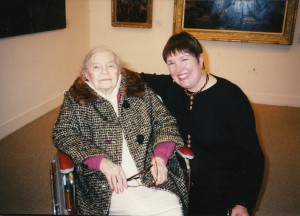 Theresa Bernstein & Patricia Burnham at the Philadelphia Museum of Judaica, 1995

The year was 1987. Elsa Honig Fine, Editor and Publisher of Woman’s Art Journal, decided to publish an article about Theresa Bernstein at the behest of many women artists. She contacted her colleague and close friend in Boston, Alicia Faxon, and asked her to write the article. Dr.Faxon was the perfect person to do it, but she was swamped with a major project and couldn’t comply, so she asked me to take her place. I was somewhat reluctant because of other commitments and also because I was immersed in eighteenth and nineteenth century American art. Fine and Faxon persuaded me that it was a doable proposition that ended up greatly expanding my purview. Geographically situated, I trotted down to have lunch with Theresa, and later interviewed her in Gloucester. Not only was I impressed with her art, but we bonded almost immediately. We did a lot of talking throughout the years–about art, of course, but also about relatives, politics, history, our lives, and much else. Theresa shared many of her concerns with–stories about their poverty during their early years, her bitterness about people who stole some of her works, her intense desire to get people to buy her work, and many other issues. Such an interesting, wonderful person!

At the same time, Dr. Fine asked me to visit H. Girard Jackson (known then as now as Jerry Jackson) in Stamford (very convenient) and take a look at his large collection of Theresa’s work and that of her husband, William Meyerowitz. I was overwhelmed with the high level of the art. Another friendship blossomed.

The article was published in the Fall 1988/Winter 1989 issue. By that time, I had moved to Austin, Texas, to take up a position at The University of Texas. Theresa was not pleased when I moved to Texas, but we managed to keep up our friendship via letters, phone calls, and visits on my part two or three times a year. In between, I got to see most of her large exhibitions and was often asked to give a talk. I missed seeing Joan Whalen’s earliest exhibition on 57th Street and Michelle Cohen’s Echoes of New York: The Paintings of Theresa Bernstein (Museum of the City of New York), but I eventually caught up with them–two more admirable women. In 1995, I was invited to curate the exhibition Theresa Bernstein: People and Places–A Retrospective at the Philadelphia Museum of Judaica, Congregation Rodeph Shalom, in Philadelphia and asked to speak at Shabbat. Such a privilege!

To our amazement, Theresa remained a robust and active centenarian for some time, but eventually the end was just around the corner. Jerry Jackson kept me alerted to her condition. I sped to New York sometime in late 2000 or early 2001, to say good-bye to her in her apartment. Theresa died on Tuesday, February 12, 2002, at Mount Sinai Hospital. The funeral took place on Sunday. To my utter surprise, I was asked to speak. The tears ran down my cheeks, but I knew what to say.