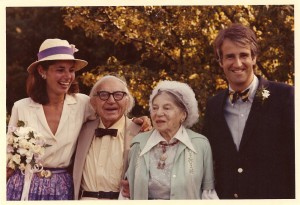 This photo was taken in Gloucester on September 6, 1980-the day of our wedding. Four years earlier, we met Theresa and Bill at their summer home in Gloucester having discovered his work  months earlier at Raydon gallery in New York.  Immediately, our friendship blossomed, and over the years, we became collectors of their works. On many summer nights, Bill and Theresa were featured guests at our dinner parties overlooking Ten Pound Island, our view the subject of many of Lane’s and Homer’s Gloucester paintings. Theresa would regale us with stories of their friends and fellow artists of the 20th century who painted on Cape Ann-Stuart Davis and Marsden Hartley to name a few, and recite poetry heralding or critiquing artists past and present. Bill would sit contemplatively while Theresa controlled the floor and then belt out an operatic aria. After one particular evening, we were surprised when Theresa left one of her paintings as a gift.  In an envelope, we discovered a pastel painting of two young girls …ages 5 and 9. Years later, J.J. and I would be blessed with two daughters who are also 4 years apart in age.

In the fall, usually on Columbus Day weekend, Bill and Theresa would pack up their belongings and leave for New York City.  We would always visit their home on Mt. Pleasant Ave. to say goodbye, and in most cases, we would leave with another painting. While painting was their forte, cooking was not. After drinking well-aged Manischewitz wine and eating overcooked pasta with cold chick peas from a can (which J.J. hid in his napkin), we were ready to retire to the studio. Theresa, being the consummate saleswoman, was always anxious to leave Cape Ann with a few more sales under her belt.  On one particular Columbus Day weekend, we purchased one of our Theresa masterpieces, Armistice Day, a painting which she had discovered in the attic that evening. It was so dirty and dusty you could barely make out the subject matter but we both knew it was a great painting. In the winter, we would always travel to their New York studio and usually buy more paintings. On one such occasion, we visited with another couple-also friends of Theresa and Bill. As usual, Theresa would be in a “selling mode” and unfortunately, both couples wanted the same painting, another iconic work which we would both lose, Hudson Ladies, the one that got away.

After Bill died in 1981, we saw Theresa every summer until her death in 2002. She was both a prolific painter and writer during this period and never lost her ability to sell a painting. While Bill was alive, Theresa focused most of her energies on selling his works. After his death, she became equally adept at selling her own paintings. In 1987, we had our first daughter whom we named Chelsea. Theresa was so excited that she had a wool blanket specially made for her. During one summer, Theresa (in a wheel chair by then) came to our home with Chelsea’s gift. Soon, Chelsea was sitting on her lap with the blanket wrapped around her.

As J.J. and I continued to collect paintings (Cape Ann art for the most part), we realized how much more meaningful it was to collect art if you knew the artists. Our relationship with Bill and Theresa was unique because while we were collectors, they were also longstanding friends. Even though we were 60 years apart in age, in the case of Bill and Theresa, age was a meaningless concept.